For sale is a guidebook and a set of FOUR credentials for the 2010 shareholders meeting in Nebraska.

I have been a Berkshire Hathaway shareholder since 1996, which was two years after my immigration into this country, and being a shareholder of BRK and a recipient of Warren Buffett's and Charlie Munger's worldly wisdom has benefited me immensely. Suffice it to say that I avoided major losses because their way of thinking dissuaded me from investing into several of late asset bubbles. I attended the '2000 meeting and taht meeting, specifically, reinforced my conviction to stay out of the dotcom stocks and continue investing into Berkshire. I would never be as well off without listening to Warren and Charile, and I recommend the same for you. They do not have as many years of life left, so now may be the best time to go. Despite doing well with Berkshire, I have never been the one to decline maknig a quick buck, so here goes my set of credentials. 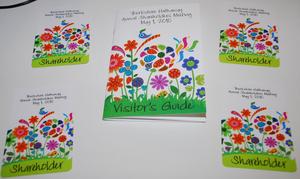